The chess community of Oktyabrsky city has defined the best sportsmen

The chess community of Oktyabrsky city has defined the best sportsmen

By one of the best chess players of city Oktyabrsky was recognized Kamiliyanov Timerbai Sabiriyanovich – the associate director on development of the equipment and technologies of SPF Paker, LLC. T.S. Kamiliyanov has won a fast chess and in classics.

Now, Timerbau Kamiliyanovu 66 years old. How many remember, he always played chess. During the period of the USSR wrote out specialized magazines. Often looked parties of protruding chess players, tried to analyze and understand, why they play so strongly. Master FIDE became in 1994. Then for Kamiliyanov was a long business trip to Moscow. He has chosen time and with advantage participated in several serious tournaments on the chess.

Timerbai Sabiriyanovich ten times became the champion of city of Almetiyevsk. In Oktyabrski a second year step by step wins the championship of city on a classical chess.

In a chess plays to distract first of all from work. It both resting, and good energy for a brain. It is convinced, that a chess – irreplaceable employment for progress of logical thinking. A chess learn to analyze mistakes, to make the weighed decisions, and not only during the game, this all is transferred to a real life and helps to overcome problems. Besides at admirers of this wise game always a high level of self-organization, they are able to achieve an object in view. Timerbai Sabiriyanovich said: « All reached by me in work is a merit of a chess. I can quickly count versions, I am not lost in case of failures, I show diligence and always I find a way out of complex situations». 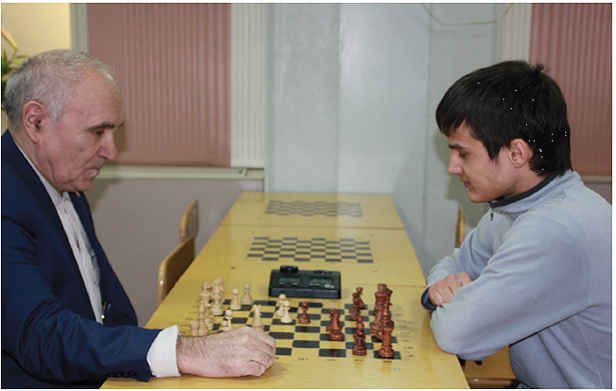